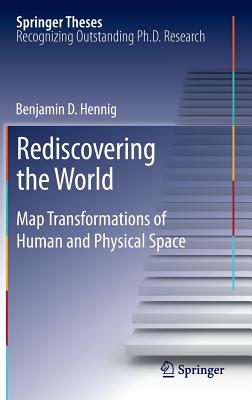 'We need new maps' is the central claim made in this book. In a world increasingly influenced by human action and interaction, we still rely heavily on mapping techniques that were invented to discover unknown places and explore our physical environment. Although the traditional concept of a map is currently being revived in digital environments, the underlying mapping approaches are not capable of making the complexity of human-environment relationships fully comprehensible. Starting from how people can be put on the map in new ways, this book outlines the development of a novel technique that stretches a map according to quantitative data, such as population. The new maps are called gridded cartograms as the method is based on a grid onto which a density-equalising cartogram technique is applied. The underlying grid ensures the preservation of an accurate geographic reference to the real world. It allows the gridded cartograms to be used as basemaps onto which other information can be mapped. This applies to any geographic information from the human and physical environment. As demonstrated through the examples presented in this book, the new maps are not limited to showing population as a defining element for the transformation, but can show any quantitative geospatial data, such as wealth, rainfall, or even the environmental conditions of the oceans. The new maps also work at various scales, from a global perspective down to the scale of urban environments. The gridded cartogram technique is proposed as a new global and local map projection that is a viable and versatile alternative to other conventional map projections. The maps based on this technique open up a wide range of potential new applications to rediscover the diverse geographies of the world. They have the potential to allow us to gain new perspectives through detailed cartographic depictions.

Benjamin graduated in geography from the University of Cologne with research on hyperspectral remote sensing applications for coastal ecosystems undertaken at the Alfred Wegener Institute for Polar and Marine Research in Bremerhaven, Germany. After working as a lecturer in human and urban geography in Cologne he joined the Social and Spatial Inequalities research group at the University of Sheffield, United Kingdom, in 2008 where he completed his Ph.D. in 2011 with research on novel cartographic techniques. He continues his work in Sheffield as a research associate at the Geography Department working on geospatial data analysis and geovisualisation.