Guardians of the Valley: John Muir and the Friendship that Saved Yosemite (Hardcover) 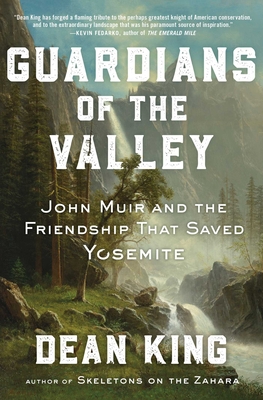 The dramatic and uplifting story of legendary outdoorsman and conservationist John Muir’s journey to become the man who saved Yosemite—from the author of the bestselling Skeletons on the Zahara: A True Story of Survival.

In June of 1889 in San Francisco, John Muir—iconic environmentalist, writer, and philosopher—meets face-to-face for the first time with his longtime editor Robert Underwood Johnson, an elegant and influential figure at The Century magazine. Before long, the pair, opposites in many ways, decide to venture to Yosemite Valley, the magnificent site where twenty years earlier, Muir experienced a personal and spiritual awakening that would set the course of the rest of his life.

Upon their arrival the men are confronted with a shocking vision, as predatory mining, tourism, and logging industries have plundered and defaced “the grandest of all the special temples of Nature.” While Muir is consumed by grief, Johnson, a champion of society’s most pressing debates via the pages of the nation’s most prestigious magazine, decides that he and Muir must fight back. The pact they form marks a watershed moment, leading to the creation of Yosemite National Park, and launching an environmental battle that captivates the nation and ushers in the beginning of the American environmental movement.

Beautifully rendered, deeply researched, and inspiring, Guardians of the Valley is a moving story of friendship, the written word, and the transformative power of nature. It is also a timely and powerful “origin story” as the toweringly complex environmental challenges we face today become increasingly urgent.

Dean King is an award-winning author of ten nonfiction books. He crossed the Sahara on camels and in Land Rovers while researching Skeletons on the Zahara, trekked the Long March trail in the mountains of Western China for Unbound, and was shot at while researching The Feud in Appalachia. His writing has appeared in Granta, Garden & Gun, National Geographic Adventure, Outside, Travel & Leisure, New York magazine, and The New York Times. He is the chief storyteller in two History Channel documentaries and is a producer of its nonfiction series Hatfields & McCoys: White Lightning. An internationally known speaker, King has also appeared on NPR’s Talk of the Nation, ABC World News Tonight, PBS American Experience, BBC Radio, and TEDx. He is a partner of Gum Street Productions, which is currently developing a feature documentary for Netflix.