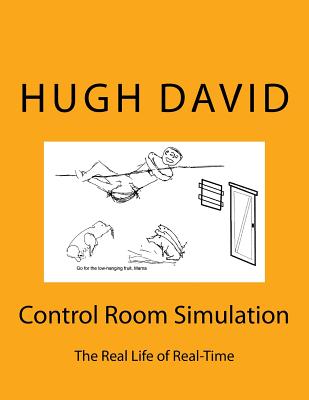 By Hugh David
$24.95
Usually Ships in 3-5 Days (Subject to Availability)
This title is NON-RETURNABLE.

Real-Time simulation of control rooms has been an empirical practice in Air Traffic Control for many years. It is increasingly relevant to other fields of human endeavour, such as aircraft and air systems, trains and railway systems, ships and seaways, road traffic, including tunnels and bridges, goods distribution, electricity generation and distribution networks, gas extraction and distribution systems, water storage and distribution systems, currency and stock market trading floors, chemical plants and pipelines, fire, police and ambulance services and many other control rooms.. There is very little published literature in this field, because it lacks scientific rigor, because of commercial 'trade secrecy', because few workers in this field have seen publication as an asset to their individual career development, and because it can be very, very, boring. This work will provide anyone interested in control room simulation with a guide to the practical aspects of Real-Time simulation. It has been said that Real-Time simulation has more in common with 'Method' acting than scientific research. This book provides information, entertainment, lessons, examples of reports, conference papers, verbal presentations and posters, and even some suspense - which is more than can be said for most theatre these days. Although it is not the first publication to bring sex into air traffic control - that distinction belongs, of course, to a Frenchman - sex is not neglected. And if you don't buy it, you'll never find out where the pig comes in. The views expressed in this book are the author's own and are not necessarily endorsed by EUROCONTROL or its management.

Hugh David became interested in computing in 1958, when studying Mathematics at Manchester University, where he had to register as an 'extra-mural' electrical engineering student to learn to program the Manchester Mercury computer, a valve machine. After National Service in the Royal Artillery, in 1961 he joined a design team developing a portable computer for field artillery. He designed and built a model of the interface with the user, using a 'window' system to prompt the user. He then joined the Department of Ergonomics and Cybernetics at Loughborough University, producing an M. Sc. thesis on the cybernetics of libraries. While teaching in that department, he completed a PH. D. thesis on the ability of air traffic controllers to predict potential conflicts in 1970. From 1970 to 2002 he worked at the Eurocontrol Experimental Centre, studying Air Traffic Controllers and Air Traffic Control by methods ranging from neurophysiology to social anthropology. He spent much of this time involved with the development, measurement, running and analysis of large-scale Real-Time simulations, acquiring practical experience and expertise not available in published form. He also developed a suite of statistical analysis programs (STATCAT) in ANSI FORTRAN IV, designed to provide a user-friendly interface with the user, before the term was coined. Elzevier published the complete package in 1982 as a 750 page book. In 1996 he was created Independent Research Fellow at the Eurocontrol Experimental centre, and carried out a series of studies on the measurement of strain and stress on controllers. He also began an examination of the displays used by controllers., which led to 'in-depth' studies of the air traffic system. He is continuing to study Air Traffic Control and controllers, as well as the complete Air Traffic system. He is currently completing a 'skeleton' re-design of the Air traffic system, applying systematic design to the complete system, to show that an efficient, economical, satisfying system can be provided by using existing technology in a planned fashion, rather than the present 'kludge' - a collection of ad-hoc expedients.