The Impossible Mile: The Power in Living Life One Step at a Time (Hardcover) 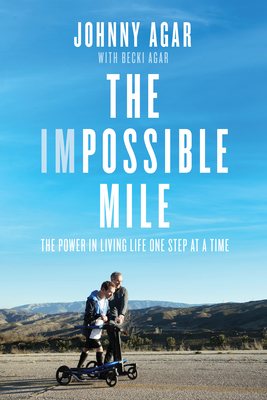 An incredible story of Johnny Agar, born with cerebral palsy and whom doctors thought would never walk, overcoming the odds to compete in Ironman triathlons. Featured on ESPN, NBC Nightly News, Today, and other media outlets, Johnny delivers a moving memoir that is a testament to the power of family, faith, and extraordinary courage.

In The Impossible Mile, told with candor and lightened with humor, Johnny shows what is possible time and time again. His story starts in a Michigan hospital, where he is born eleven weeks premature. An ultrasound reveals bleeding on his brain, and he is diagnosed with cerebral palsy, a condition that hinders a person's ability to control muscle movement. Doctors say he will likely have intellectual disabilities and that he will never walk. Despite the pending challenges, Johnny's parents choose to raise their firstborn without limitations on his abilities. This decision would forever shape Johnny's life, his enduring belief in himself and his dreams.

Growing up, Johnny aspires to be an athlete like his father, Jeff, once a professional baseball pitcher for the Detroit Tigers organization. Sports was in the young boy's blood. But how could he become an athlete? He can't walk unassisted, and his muscles have a mind of their own. To give Johnny a taste of competition, the father and son start participating in 5K road races, Jeff pushing Johnny in a modified wheelchair.

Until one day Johnny has a bold idea. He will chase his dream--literally--of becoming an athlete by walking part of a race. More than just the few steps he has taken in therapy, he decides that to truly become an athlete he needs to go further. Assisted by his father, Johnny trains for his first impossible mile. What he doesn't know is that his bold idea will do more than change just his life forever.

Johnny's story shows the impact of a life lived to its fullest, from the first difficult steps in training, to becoming a brand ambassador for global apparel company Under Armour. He now serves as an inspiration for not only other professional athletes, but for anyone facing their own impossible mile. Come walk a mile in Johnny's shoes, and realize, as Johnny did, you never walk alone, and anything is possible, if you'll just take on life one step at a time.

PRAISE FOR The Impossible Mile

"Johnny Agar is a true inspiration as a person and an athlete. Where most might see nothing but obstacles, he sees nothing but opportunities. Johnny's commitment to pursuing his dreams and sharing his journey along the way is a tremendous gift to us all." - Michael Phelps, most decorated Olympian in history

"Johnny Agar's life story is an inspiration to me and all who know him. He sees every challenge as an opportunity, and his positive attitude and passion, combined with his faith, show us all that nothing is impossible." - Kirk Cousins, quarterback for the Minnesota Vikings

"The Impossible Mile is a powerful memoir about the coming of age of a young-adult athlete challenged by the reality of cerebral palsy, wheelchair use, and misperceptions about disability. It's also about the personal courage, deep faith, supportive family, and solid sense of humor that helped propel the author to reach seemingly impossible life dreams. Whether you are looking for how to take your own dreams to the next level or searching for inspiration about how to confidently raise a child with differing abilities, Johnny Agar's heartfelt words will educate, entertain, and inspire you--and they might just change your life, too." - Judy Winter, author of Breakthrough Parenting for Children with Special Needs: Raising the Bar of Expectations and co-founder of the Eric "RicStar" Winter Music Therapy Camp at Michigan State University

"When I won the gold medal with the USA 2018 women's Olympic team, it wasn't just an individual effort. I was surrounded by fantastic teammates and great coaches, but there were so many others. I had a team behind me; my family and friends encouraged me my entire life to work hard and stay determined. They also taught me how to never give up. In The Impossible Mile, Johnny understands the importance of surrounding himself with a good team. One who will support him, encourage him, and be there for him when he falls (literally and figuratively). Johnny's strength coupled with his determination proves to everyone that barriers can be overcome with the right amount of hard work and great people surrounding you. Johnny may never win a gold medal, but his positive attitude and resilience at failure gives him a spot on the podium in my book " - Megan Keller, Olympic gold medalist for USA women's hockey

"Johnny Agar's life is a story of perseverance and showing that you can accomplish anything with will and determination. I was so moved when I first heard his story--even more inspired when I met him--and my team was inspired when they saw his story. Johnny said that when he would go on runs with his dad, he used to participate, and when he completed his impossible mile, he had the chance to say 'I'm an athlete.' More than anything, he has proven throughout his life that you can come through when you need to come through, no matter what life throws at you." -Tom Izzo, head coach for men's basketball at Michigan State University Spartans

"Working with professional athletes every day, I am used to seeing extreme sacrifices made daily by the players and their families. Reading The Impossible Mile has impacted my thought process regarding my approach to coaching. It has renewed my spirit and drive, and I want to use Johnny's story as a platform to facilitate teamwork and perseverance in my coaching." - Patrick Sullivan, director of recruitment for men's basketball at the University of North Carolina Tar Heels

"We have over thirty races spread across twenty-plus countries in the world, hosting over 75,000 race participants, but we are all one big family. Johnny and his dad are a part of that family. When Johnny participated in the DATEV Challenge Roth in Roth, Germany, by using his walker to finish the last mile, he helped transform the way people view those with disabilities. When we overheard a young girl look up to her mother and say, 'I didn't know people in wheelchairs could be athletes ' we knew Johnny's participation was going to change lives. We can only imagine how The Impossible Mile will impact many more toward a positive change." - Zibi Szlufcik, president of the board for Challenge Family triathlons

"Leading a company for many years taught me a lot about the qualities needed to run a successful business. An important one is having a positive mindset--not only in business, but also in life. We can become so overpowered with negative thoughts that we can fail even before we try I met Johnny Agar several years ago and was taken aback by the hopefulness he has, given the many challenges he faces. The Impossible Mile is a compelling testimony to the power a positive attitude has on achieving the goals you set out for yourself." - Dave Haffner, former CEO and chair of Leggett & Platt

"This amazing story of determination and family love is an example for us all. The Impossible Mile is a testament to never giving up and to the power of love in the battle to overcome the odds." - Greg Meyer, former Boston Marathon winner

"As a firefighter, I was surrounded by strong and courageous men who taught me how to fight, even when there was no fight left in me. When I needed lessons of courage, strength, and selflessness, I would turn to my firefighting community and look nowhere else. Then God placed Johnny in my life to humbly beat that arrogance out of me. This book has reinforced what Johnny has been teaching me all along. I fought a few fires every week, but Johnny courageously fights multiple fires every day. And he does it in a way that inspires me to be better. This book will do the same for you " - Jason Sautel, author of The Rescuer: One Firefighter's Story of Courage, Darkness, and the Relentless Love That Saved Him

"The first time I met Johnny he was just fourteen years old. As a major fan of The Rookie, he wanted to know all about my story and how I was able to do something that no one thought was possible even when the odds were against me. Just a few short years later, Johnny did the same when he walked across that finish line for the first time The Impossible Mile is a gift to all of us because it reminds us that no dream is ever out of reach. With so many people saying you can't, Johnny Agar said, 'I will '" - Jim "the Rookie" Morris, relief pitcher for the Tampa Bay Devil Rays, inspiration behind Disney's The Rookie, author of The Rookie and Dream Makers

"Johnny Agar is a true testament to what Ironman represents--defying the odds and proving that 'Anything is Possible' with each step he takes. Johnny displays determination and courage, and his story is an inspirational example to never lose sight of your personal finish line." - Andrew Messick, president and chief executive officer for The Ironman Group

"Upon receiving the John F. Kennedy Profile in Courage Award, my dad remarked, '...the greatest defeat of all would be to live without courage, for that would hardly be living at all.' This book was a great reminder for us all to take that courageous first step. When the goal seems overwhelming, it is the strength of the human spirit, our determination, and our resilience that propel us forward. Johnny Agar is proof of that " - Michael Ford, son of President Gerald R. Ford and Mrs. Betty Ford

"In my lifetime I have been able to interview some pretty fascinating people and covered a lot of life-changing stories. From traveling with.

Johnny Agar gained international attention when he walked a mile in his church's annual 5K. That sounds like an odd reason for fame, except for the reality of Johnny's severe cerebral palsy. Even with a lifetime of physical therapy before this race, the longest distance he'd ever previously walked was twenty-three steps. Since that incredible feat, Johnny and his father, Jeff, have partnered in countless races, including the infamous Ironman World Championship in Kona, Hawaii, which was chronicled by NBC. Johnny has been featured on Today, Inside Edition, NBC Nightly News, People, USA Today, HuffPost, and ESPN's SportsCenter. His tenacity and indelible spirit have inspired numerous professional and Olympic athletes, and Johnny is a brand ambassador for the sports apparel company Under Armour. Even so, he will tell you that his crowning accomplishment was getting post-race recognition from his biggest sponsor in the form of twenty-gallons of his favorite Meijer ice cream. Now Johnny gives motivational speeches to inspire others to overcome their challenges and chase their dreams, one step at a time. Among his other roles, Johnny serves as the athletic ambassador for the Cerebral Palsy Foundation, and he's proud to have earned a dual major in sports management and business administration from Aquinas College in Grand Rapids, Michigan. Becki Agar is an advocate, philanthropist, and mother of three children. After beginning a career as a credit analyst, Becki's passion for children led her to open a day care. When she had children of her own, she closed the day care to raise them, an experience that has been the greatest blessing of her life. Becki currently fundraises and advocates for organizations that have been instrumental in helping children who have special needs to be as independent as possible on their journeys through life. She graduated from Grand Valley State University with a degree in sociology and a minor in psychology. The Impossible Mile is Becki and Johnny's first book.