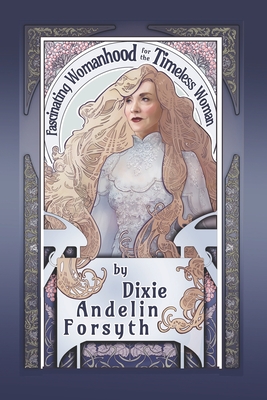 By Dixie Andelin Forsyth
$21.95
Usually Ships in 3-5 Days (Subject to Availability)
This title is NON-RETURNABLE.

Over 50 years after the original book became a bestseller and birthed an international women's movement, the sequel to Helen Andelin's Fascinating Womanhood is here. Originally published in 1963, Fascinating Womanhood sold over 5 million copies globally and was been translated into 7 languages. As controversial as it was popular, the book also spawned a grassroots movement of classes where women could learn more about feminine influence in relationships and the home-classes that continue to this day in countries including Australia, Brazil, Cameroon, Japan, the Philippines, Saudi Arabia, South Africa, Uganda, the United Kingdom, and the United States. The sequel Fascinating Womanhood for the Timeless Woman sees Andelin's daughter, Dixie Andelin Forsyth, pick up her mother's mantle with the aim of 'awakening an enlightened form of femininity in women, in order to inspire a noble masculinity in men and create a lifelong romance.' With teachings that lean strongly on relationship roles-focusing on division of labor between task and relationship leaders-Fascinating Womanhood has also been called "the book feminists love to hate" and there's no doubt that its sequel is set to raise eyebrows, particularly at a time when gender norms and roles are a hot topic. While some may wonder whether these teachings have relevance within the context of a modern world, Dixie believes they have never been more important. "Fascinating Womanhood for the Timeless Woman holds the position that most cultures have lost the sense of ascendency that comes from proper cultivation of femininity and masculinity in women and men, respectively. We believe that femininity inspires a noble masculinity in men and that it empowers and liberates women to pursue their greatest potential. We teach that women are the 'gatekeepers of civilization' and 'humanity's original adults.' We refer to something we call 'feminine power' which is unlocked by a 'fascinating woman, '" Dixie says. In the years before Helen's passing on June 7, 2009, when it became clear that she would not be able to complete her ambitions of updating the original Fascinating Womanhood book or writing its intended sequel, Helen began preparing Dixie for the task. During that time, she and her mother had broad discussions on the topics to be explored. For Helen, it was a kind of 'life in review', while Dixie was a seasoned teacher by this time and had lived the principles nearly her whole life. As much as she was Helen's lifelong prot g e, she was also her mother's philosophical sparring partner and the result is that the sequel bears Dixie's mark as much as it does Helen's. Fascinating Womanhood for the Timeless Woman is not merely a book of personal or moral opinions. It's based in part on modern science, over 50 years of teaching experience and feedback, and most importantly, results. While Helen's approach to Fascinating Womanhood began as an academic exercise, with her consulting experts, authors, and other reputable sources in order to add new wisdom to her concepts, it's evolution came about mostly through a process of application and feedback via the international teaching program. The Fascinating Womanhood blog features dramatic accounts of improved lives and marriages throughout the world. Dixie has used a similar approach with the sequel. While she too drew strongly on her experience and the feedback of the teachers and students, she also expands on new themes that her mother only touched on. With assistance from her husband Dr. Robert D. Forsyth and his research as a licensed psychologist specializing in neuropsychology, her book features pioneering information about the human brain, with a chapter devoted to practical brain architecture for better self-awareness and more effective relationship communication. The sequel also explores the male condition in much more detail, geared towards arming women with better understanding of their partners.