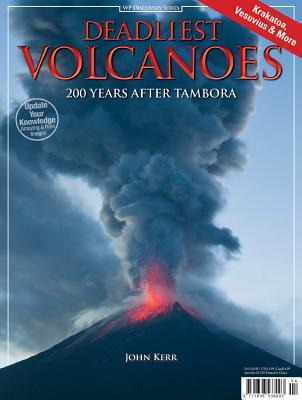 A volcanic eruption is an awesome sight. Thunderous noise. The earth shaking. Plumes of ash and smoke spewing into the atmosphere, and lava pouring from the crater. But when a volcano erupts, it's best to get away, and fast. Volcanoes kill. And they can do it quickly. Deadliest Volcanoes, from author John Kerr, is about the biggest and most powerful volcanic eruptions the world has seen. It's full of eyewitness accounts and photos of some of history's best known, and not so well known, volcanoes. Mt. Tambora had such ferocity that it made 1816 the "Year Without a Summer" across the entire planet. Mt. Vesuvius was mythologized when it buried Pompeii. There's Krakatoa, which in 1883 destroyed much of the island it called home. And there's also the Supervolcanos, which are so massive that when they erupt they cover the entire planet in a cloud of ash. Deadliest Volcanoes covers these eruptions and many more. Readers will be informed and entertained by the vivid descriptions of when nature is at its most furious.

John Kerr maintained his childhood fascination in the things that shake and break the land, through his university studies in earth science, to the present day. The growth in what humans know about volcanism—its past, present and ominous future—seems to him to be one of the great unsung endeavors of the last half century.