The Kinks: Songs of the Semi-Detached (Reverb) (Paperback) 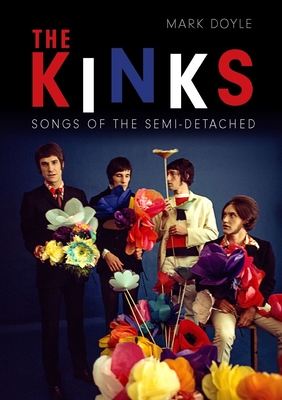 Of all the great British rock bands to emerge from the 1960s, none had a stronger sense of place than the Kinks. Often described as the archetypal English band, they were above all a quintessentially working-class band with a deep attachment to London, particularly the patch of suburban North London where most of the members grew up. In this illuminating study, Mark Doyle examines the relationship between the Kinks and their city, from their early songs of teenage rebellion to their later album-length works of social criticism, providing a unique perspective on the way in which the band responded to the shifting nature of working-class life. Along the way, he finds fascinating and sometimes surprising connections with figures as diverse as Edmund Burke, John Clare, Charles Dickens, and the Covent Garden Community Association. More than just a book about the Kinks, this is a book about a city, a nation, and a social class undergoing a series of profound, sometimes troubling changes—and about a group of young men who found a way to describe, lament, and occasionally even celebrate those changes through song.

Mark Doyle is professor of history at Middle Tennessee State University. He is the author of Fighting Like the Devil for the Sake of God: Protestants, Catholics, and the Origins of Violence in Belfast and the editor of The British Empire: A Historical Encyclopedia.

“Quixotic . . . [and] excellent. . . . Doyle’s book is a welcome piece of historically informed criticism that situates the Kinks in their proper milieu—postwar, working-class North London—and their cultural moment: the British music explosion of the 1960s. . . . For a book that doesn’t once mention Brexit, The Kinks: Songs of the Semi-Detached demonstrates precisely how Britain arrived at the referendum of June 2016.”
— Wesley Stace

"With this brief, insightful volume, Doyle reveals a new angle, what he calls 'historically informed rock criticism.' . . . By studying The Kinks' output in the context of the spheres in which they operated, Doyle creates an almost sociological portrait of the group's values, city, and views on the music industry. . . . This thoughtfully researched book will be best appreciated by true fans of the band, as well as devotees of 1960s rock and pop."
— Library Journal

"As a piece of rock criticism this is a masterful text, and as an examination of social change in twentieth-century Blighty, it is as illuminating as it’s possible to get. Doyle unravels The Kinks’ relationship to working class England in a variety of ways, casting a light on Ray Davies’s genius for creating immediately identifiable characters as vehicles for social commentary. Doyle’s insights into the subject matter of Davies’s lyrics are particularly illuminating, with the deliberate ambiguity of meaning in his composition a vital factor in their enduring appeal. That half-smile may have lent a clue, but Davies’s veering between sneering hipster and Victorian Romantic meant that one was never sure that all was what it seemed. Davies’s own love affair with London and its people is brought to life through the author’s exhaustive research and his commensurate skill in both contextualizing the songs and celebrating the ‘apartness’ of their creator. A compelling read for anyone even remotely interested in the band and its music.”
— Shindig!

"Doyle finds the world of postwar Britain, rapidly changing yet also nostalgic, endlessly fascinating. He sees class and social attitudes through the eyes of an outside observer, and places Davies in the company of Betjeman, Auden, and Larkin as a chronicler of suburbia. . . . The Kinks is thoughtful and readable."
— Literary Review

"The author interprets Lola versus Powerman . . . and Muswell Hillbillies as distinctly angry responses to personal and social issues, as Davies chronicles his disillusionment with the music business and rages about urban renewal. Doyle's wide-ranging analysis takes in town planning, modern architecture, the seeds of Thatcherism, and more. . . . The scope is impressive."
— Irish Times

"Here in 2020, writing about the Kinks—about any of the groups of the 1960s—is increasingly a nostalgic act, a paean to a lost world of hit  parades, Top of the Pops, the Beatles v. the Stones, albums and singles, the dwindling ecology of pop music as it once was. As a series of eightieth birthdays and sixtieth anniversaries hove into view in the decade ahead, what until recently still felt like  celebration is beginning to assume the quality of commemoration. They are knighting the survivors, among them Sir Ray Davies. So it is to Doyle’s considerable credit that in this book he succeeds in making The Kinks’s records, these historical recordings from a bygone era, seem brand new, fresh, and relevant; and he does so by recreating the past. . . . I know these records inside out, but Doyle sent me back to them with fresh insights and enthusiasm. . . . There are more straightforward accounts of The Kinks’s career available, including some by members of the group, but few are as eloquent, persuasive, or fully engaged."
— Spectator

“Doyle is less a fanboy, more inclined to trace the psychogeography of Ray Davies’s immaculate lyricism, drawing a ley line from Fortis Green to all things Carnabetian. . . . As an example of critical rather than academic investigation, Songs of the Semi-Detached nails Davies’s observational cynicism and class-consciousness, revealing his many masks.”
— Max Bell

"Just when you think most everything that could be written about (or by) The Kinks has been published, along comes a wonderful assessment about the band and the city it has always called home. . . . Doyle brings an academic but far from dry lens to the crucial years of the band, from inception in 1964 to the autobiographical Muswell Hillbillies album from 1971 . . . Davies clearly loves and hates the past. He has grappled with that dichotomy for decades, and Doyle does a fabulous job of elucidating the conundrum that is Ray Davies."
— Entertainment Today

"Compact, readable. . . . Perhaps in a serendipity of a curriculum, this text might complement a seminar in British culture. Its tone and research prove its intent to articulate social critique through music for the masses. . . . Recommended for fans seeking education along with immersion into this band's melody and wit, Doyle conveys the Kinks' vision of a familiar, if elusive, bit of English decency."
— PopMatters

"Few bands have expressed as strong a connection to a particular geographical location as the Kinks. Waterloo Sunset is perhaps the ultimate London song, but as this fascinating book points out, the connections to the capital and its cultural, historical and literary traditions run even deeper."
— Choice Magazine (UK)

"Doyle extracts meaning from narrative without simply going through the lyrics. Rather, he offers what he calls 'historically informed rock criticism': careful descriptions of the social, political, and cultural contexts of each album, with the Kinks placed convincingly in the longer continuum of English artistic expression, from Hogarth to Dickens, from Orwell to Betjeman. The result is a beautifully crafted, sustained meditation on postwar, working-class London and on the gentle balance between memory and nostalgia. . . . For those unfamiliar with the Kinks in all their 'sloppy, joyous and occasionally maudlin' glory, Doyle’s Songs of the Semi-Detached is both an informed guide and sterling companion. And at a time when the very idea of England is changing, the Kinks’ music is both a bright remnant of the past and a dark portent of times to come."
— Times Literary Supplement

"This is a study of postwar Britain and Ray Davies’s personal struggle to get along with changing attitudes, fashions, government regulations, deteriorating housing situations, and disintegrating families and communities. . . . Drawing from many fields such as sociology, psychology, theater, and even city planning, the title is also a philosophical approach to the music of the Kinks. Very recommended reading."
— popcultureshelf.com

“What enriches Doyle’s explication of the band’s output is that he digs deeply into the historical and contemporary context behind these tracks and albums. . . . The Kinks are frequently held up as paradigms of Englishness and in this carefully researched study, Doyle peels back layers of cultural baggage to reveal how deeply ingrained ancient elements of Englishness—a bricolage of music, poetry, and art—had an effect on Ray Davies’s observation and expression. . . . Doyle explicates the Kinks’ ambiguity, confusion, detachment, passion, anger, self-effacement, and vulnerability—the bigger picture behind the familiar smirk on dolly Ray’s face.”
— Journal of British Studies

"This is the kind of critical work I love best: cogent, insightful, well-written, a bit quixotic, and showing a complete mastery of the subject. Doyle brings something else entirely to the growing library of Kinks histories and memoirs. Just as Dave Davies provided the sonic architecture for entire genres of rock, Ray's songwriting established him as the quintessential London chronicler of the twentieth century. The Kinks are well worthy of this deeply researched book, delivered with analytical rigor and wit."
— David Smay, author of "Swordfishtrombones" (33 1/3) and coeditor of "Lost in the Grooves"