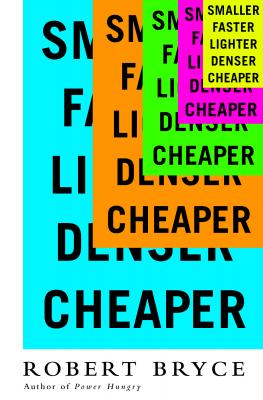 In the face of today's environmental and economic challenges, doomsayers preach that the only way to stave off disaster is for humans to reverse course: to de-industrialize, re-localize, ban the use of modern energy sources, and forswear prosperity. But in this provocative and optimistic rebuke to the catastrophists, Robert Bryce shows how innovation and the inexorable human desire to make things Smaller Faster Lighter Denser Cheaper is providing consumers with Cheaper and more abundant energy, Faster computing, Lighter vehicles, and myriad other goods. That same desire is fostering unprecedented prosperity, greater liberty, and yes, better environmental protection.

Utilizing on-the-ground reporting from Ottawa to Panama City and Pittsburgh to Bakersfield, Bryce shows how we have, for centuries, been pushing for Smaller Faster solutions to our problems. From the vacuum tube, mass-produced fertilizer, and the printing press to mobile phones, nanotech, and advanced drill rigs, Bryce demonstrates how cutting-edge companies and breakthrough technologies have created a world in which people are living longer, freer, healthier, lives than at any time in human history.

The push toward Smaller Faster Lighter Denser Cheaper is happening across multiple sectors. Bryce profiles innovative individuals and companies, from long-established ones like Ford and Intel to upstarts like Aquion Energy and Khan Academy. And he zeroes in on the energy industry, proving that the future belongs to the high power density sources that can provide the enormous quantities of energy the world demands.

The tools we need to save the planet aren't to be found in the technologies or lifestyles of the past. Nor must we sacrifice prosperity and human progress to ensure our survival. The catastrophists have been wrong since the days of Thomas Malthus. This is the time to embrace the innovators and businesses all over the world who are making things Smaller Faster Lighter Denser Cheaper.

Robert Bryce is the acclaimed author of five previous books, including Smaller, Faster, Lighter, Denser, Cheaper: How Innovation Keeps Proving the Catastrophists Wrong, and Power Hungry: The Myths of "Green" Energy and the Real Fuels of the Future. His articles have appeared in numerous publications, including the Wall Street Journal, New York Times, Austin Chronicle, Guardian, and National Review.

He has given over 300 invited or keynote lectures to groups ranging from the Marine Corps War College to the Sydney Institute and has appeared on dozens of media outlets ranging from Fox News to Al Jazeera. Bryce is also the producer of a new feature-length documentary, Juice: How Electricity Explains the World. He lives in Austin, Texas, with his wife, Lorin.

“Don't be misled by Robert Bryce's very breezy style. His new book makes important and positive observations about the world's energy future. You don't have to agree with every one of his attitudes or conclusions to hope that the reporting and arguments in the book are taken seriously, and that the innovators and start-ups he vividly describes get the support they need.” —James Fallows

"[Bryce's] new book constitutes a direct assault against the policies of "degrowth" advanced by those who peddle what he calls "collapse anxiety". The book is also a sustained argument against the fundamentally pessimistic worldview that underlies those policies. . . . The claim that we can and should replace fossil fuels with renewables such as wind and solar is, Bryce says, a "damnable lie" that obscures the far more important question of what we should do to make more energy available to more people, especially 'the more than two billion people who are still living in abject energy poverty."—John Daniel Davidson, National Review

“The author of four books on oil and energy, Mr. Bryce has written a new book well worth reading…Smaller Faster Lighter Denser Cheaper…captures the headlong rush of Western culture's endless drive for ever better technology. It is an extraordinary impulse that has created a world in which more people live longer and more comfortably than ever before.”—Fred Andrews, New York Times

“For years, Robert Bryce has been calling for rationality on energy policy. In this book, Bryce goes beyond energy to explain why the innovation that drives entrepreneurs is the way of the future. I'm an unapologetic capitalist. Reading Smaller Faster has only fortified my belief that the best way to address poverty is through entrepreneurial capitalism that produces more innovation and progress.”
—John Mackey, co-founder and co-CEO, Whole Foods Market, and co-author of Conscious Capitalism

“Robert Bryce may be our finest observer of the energy scene. Smaller Faster Lighter Denser Cheaper displays all the virtues -- the contacts, the technical savvy, the wit and clear thinking – that make Bryce indispensable.” —Charles R. Morris, author of The Dawn of Innovation and Comeback

"A book brimming with well-founded enthusiasm about the amazing present and the prospects for a more amazing future...exploding with fascinating energy facts and...super-fun to read....Bryce takes his appreciation of innovation and uses it to illuminate the past, present, and future of innovation across the board."—Forbes

“So what went wrong — or, rather, right? Why is the human race in much better shape than it was 200, 100, or 50 years ago? Robert Bryce reminds us of the answers in his sprightly new book and promises that even better times lie ahead…Bryce's new book is an enlightening stroll down the sunny side of the street.” —Hiawatha Bray,the Boston Globe

“A celebration of innovations that have produced cheaper and more abundant energy, faster computing, lighter vehicles and other technological benefits…..Bryce [is a] booster for business and technology; he makes many intriguing arguments in this ‘rejoinder to the doomsayers [and] rebuttal to the catastrophists who insist that disaster lurks just around the corner.'”—Kirkus Reviews