The Fate of the Species: Why the Human Race May Cause Its Own Extinction and How We Can Stop It (Hardcover) 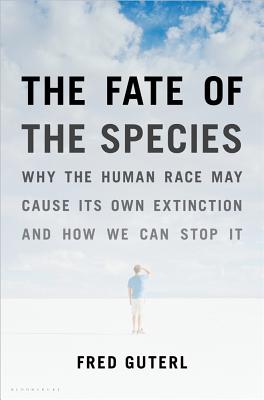 The sixth "mass extinction event" in the history of planet Earth is currently under way, with over two hundred species dying off every day. The cause of this seismic event is also the source of the single biggest threat to human life: our own inventions.

But for all our talk about sea levels and biotechnology, do we really know what our future will actually look like? Will our immune systems be attacked by so-called super bugs, always evolving, and more easily spread than ever? Will the disappearance of numerous species cripple the biosphere? And if it does, what happens then? In this provocative, gripping book, Scientific American editor Fred Guterl explores these and other looming scenarios in vivid detail-the way they might really happen-and then proffers the means to avoid them.

We find ourselves in a trap: Technology got us into this mess, and it's also the only thing that can help us survive it. Guterl's riveting book is a grand and necessary thought experiment, not merely a scary story, but a fresh perspective on the world we're remaking, and a route to safe harbor.

Fred Guterl is an award-winning journalist and executive editor of Scientific American. He worked for ten years at Newsweek, most recently as deputy editor, covering the most important trends in science, technology, and international affairs. He has also appeared on CNN, Charlie Rose, the Today Show, and on other television programs to discuss popular issues in science. Guterl holds a bachelor's degree in electrical engineering from the University of Rochester, and has taught science writing at Princeton University. He lives in the New York City area with his wife and two children.

“An intelligent account of the mess we are making of the planet.” —Kirkus Reviews

“While Guterl's pessimism is not for the faint of heart, it turns out to be remarkably entertaining.” —Publishers Weekly

“This is a beautifully written book that will make you think and worry. Fred Guterl explains everything that could go wrong in lucid prose. It is an arresting, though unnerving combination.” —Fareed Zakaria, author of The Post-American World and host of CNN's Fareed Zakaria GPS

“It feels strange to call a book about the end of humanity elegant and engaging, but so be it. Fred Guterl has researched the many, many ways in which we could bring destruction down upon our own heads, bringing them up to date with the latest research in climatology, synthetic biology, and computer science. I hope the world doesn't crash, but if it does, I can't say Guterl didn't warn me.” —Carl Zimmer, author of A Planet of Viruses

“An important, awe-inspiring book. This is a straight-from-the-shoulder assessment of the future of a humankind trapped by its own technological prowess. The Fate of the Species is written by a master of his craft with provocative, thoughtful elegance. Guterl combines measured optimism with scary scenarios in a telling synthesis of cutting edge science made understandable. This book should be required reading for everyone, and I mean everyone.” —Brian Fagan, archaeologist and author of Elixir and The Great Warming

“Guterl has written 'How We Die' for the human species. From reverse genetics that creates a deadly flu virus to climate change that kills the Asian monsoons, his scenarios are so fascinating and compelling you almost forget what's at stake. Almost.” —Sharon Begley, former science columnist for Newsweek and The Wall St. Journal

“The human species has no shortage of ways to meet its end--superviruses, climate change, global famine. But unlike other species that have come and gone in the long and sometimes pitiless history of the planet, we'd be the agents of our own destruction. The good news is, a creature powerful enough to author its own demise is also smart enough to avoid it. The Fate of the Species tells both sides of that very big tale and does so with honesty, wisdom--and more than a little hope.” —Jeff Kluger, author of The Sibling Effect

“The Fate of the Species somehow manages to frighten, amuse and enlighten all at the same time. It isn't about doom as much as the opportunity for the human race to come up with a happier ending to its story. Fred Guterl reveals how science can be by turns heroic, dangerous and helpless, and he proves a thoughtful, even-handed and sometimes playful guide to the risks that we ourselves have created. The news is sobering, but also fascinating and in some ways surprisingly uplifting.” —David Freedman, author of Wrong