Comrade Haldane Is Too Busy to Go on Holiday: The Genius Who Spied for Stalin (Hardcover) 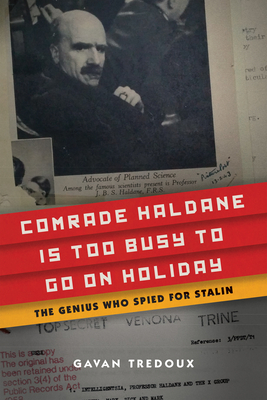 John Burdon Sanderson Haldane F.R.S. (1892-1964) was one of the leading scientists of the twentieth century, renowned for helping, through statistical wizardry, to reconcile Darwin's theory of natural selection with Mendel's discovery of genes. The product of a distinguished family of scientists and public figures, "JBS" trained and influenced a swathe of students and colleagues at Oxford, Cambridge, and University College London, many of whom, such as the evolutionary theorist John Maynard Smith, went on to distinction in their own right. As a widely known left-wing "public intellectual," Haldane gained fame as a popularizer of science and commentator on public affairs, broadcasting often on the BBC and publishing extensively in newspapers and magazines. His collections of popular scientific essays influenced a generation of upcoming scientists and remain in print today. On his death in 1964, he was accorded the rare tribute of a televised self-obituary on the BBC. Celebrated for his ability to connect seemingly disparate subjects, during the Second World War Haldane was extensively involved in scientific research to aid the British war effort. Using evidence gathered from VENONA Signals Intelligence intercepts, MI5 files, and the Haldane papers, this book reveals that Haldane was also a Soviet spy--a member of the "X Group," an espionage ring that was run out of the Soviet Embassy in London. His interlocking associations with other spies, such as Ivor Montagu and Hans Kahle; his role as a hardline Stalinist propagandist through the onset of the Cold War; his betrayal of his colleague and friend, the Soviet geneticist Nikolai Vavilov; his long-standing support for the charlatan Soviet "scientist" Trofim D. Lysenko; and his concealed stalemate with the Communist Party of Great Britain once his ability to finesse Lysenko was extinguished, are unraveled here for the first time.

Gavan Tredoux is a Fellow of the Royal Anthropological Institute and a mathematician and statistician by training, with extensive interests in the history of science (galton.org, burtoniana.org). He was a Senior Scientist in Research and Development at Xerox PARC, and currently works in the field of data science.