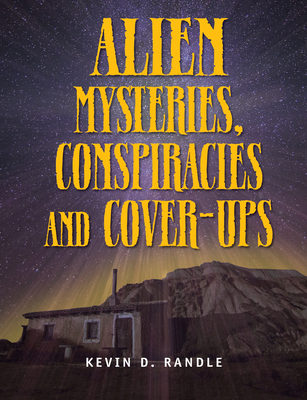 Conspiracy theories run rampant in the world of the UFO and search for alien life. Some are government-sanctioned, some are government-sponsored, and more than a few can be laid at the feet of UFO witnesses and UFO investigators. Untangle the truth from the theories Thoroughly investigated by a former Army officer and taken from his review of hundreds of historical and government documents and in-person interviews, Alien Mysteries, Conspiracies and Cover-Ups chronicles more than 100 sightings, events, and discoveries of alien encounters, government conspiracy, and the influence of extraterrestrials on human events throughout history. From prehistoric UFO sightings, cave paintings, and ancient astronauts to modern sightings around the world, Alien Mysteries investigates claims of aliens living among us, abductions of humans to alien spacecraft, and accounts of interstellar cooperation since the UFO crash in Roswell, along with evidence of what the government knows and what it has covered up. This discussion of the government secrets, theories, and mysteries surrounding aliens is packed with thought-provoking stories and shocking revelations of alien involvement in the lives of Earthlings. A complete dossier on alien activities and government cover-ups, this revealing book includes a look at prehistoric UFO sighting, Indian cave paintings, the Peruvian dinosaurs (the Ica stones), the Majestic-Twelve, the Allende letters, the faked photographs that have been published as the real thing, the Condon Committee, the Roswell bodies, the alien autopsy, project moon dust, the Phoenix lights, ancient astronauts, the recent UFO crash in Needles, California, and much more.

Kevin D. Randle is a retired lieutenant colonel in the Army who toured in Iraq. He has master's degrees in psychology and the art of military science and is the author of Crash: When UFOs Fall from the Sky, Reflections of a UFO Investigator, and UFO Casebook. He lives in Cedar Rapids, Iowa.