Made to Be Broken: The 50 Greatest Records and Streaks in Sports History (Hardcover) 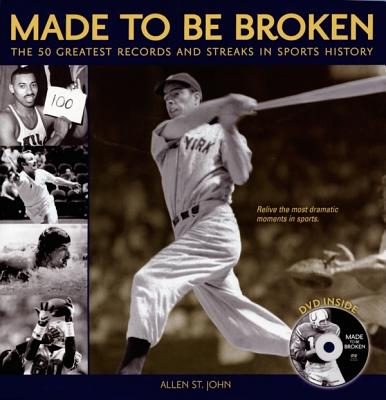 By Allen St. John
Email or call for price

This book ranks the 50 greatest records in sports while also taking a personal look at some of these amazing feats and the athletes behind them. Take Joe DiMaggio, for example, whose consecutive 56-game hitting streak is one of many records to beat in baseball, but some may not know that getting a daily hit became more important to Joe than eating, drinking, or sleeping. Then there is Soviet gymnast Larissa Latynina who has held the record for most Olympic medals (18) for 40 years and counting who managed to find time to have three children during her record-breaking quest. In Made To Be Broken, sports fanatics can relive the thrill of each record-breaking moment while getting an intimate look at each record holder and the specific stories behind their journey to make history and do something that’s never been done before. The book also includes an exclusive DVD highlighting some of the more memorable moments in sports history.

Allen St. John writes the “By the Numbers” column for the weekend section of the Wall Street Journal. He has contributed to a wide variety of national publications, including Playboy, Rolling Stone, and Maxim. He is also a New York Times bestselling author, and his previous works include Mad Dog 100 with Christopher Russo and Clapton’s Guitar: Watching Wayne Henderson Build the Perfect Instrument.