My Green Manifesto: Down the Charles River in Pursuit of a New Environmentalism (Paperback) 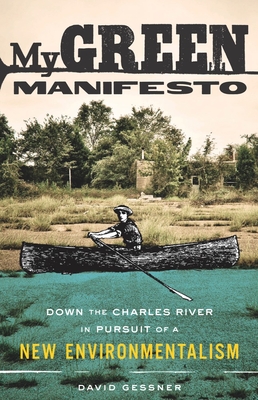 In My Green Manifesto, David Gessner embarks on a rough-and-tumble journey down Boston's Charles River, searching for the soul of a new environmentalism. With a tragically leaky canoe, a broken cell phone, a cooler of beer, and the environmental planner Dan Driscoll in tow, Gessner grapples with the stereotype of the environmentalist as an overzealous, puritanical mess. But as Dan recounts his own story of transforming the famously polluted Charles into an urban haven for wildlife and wild people, the vision of a new sort of eco-champion begins to emerge: someone who falls in love with a forgotten space, and then fights like hell for it. Considering everything from Ed Abbey's legacy to Jimmy Carter's sweater, Gessner points toward a scrappy environmentalism that, despite all odds, just might change the world.

David Gessner is the author of eight books and countless essays about the wild world, including Return of the Osprey, which was hailed as a classic of American Nature Writing by the Boston Globe and was selected as one of their top ten nonfiction books of the year. Gessner is the recent winner of a Pushcart Prize and the John Burroughs Award for Best Natural History Essay. His essays have been included in The Best American Essays series and The Best American Nonrequired Reading 2008. His work has also appeared in many magazines and journals including New York Times Magazine, Boston Globe, Outside, Georgia Review, Harvard Review, and Orion. Founder of the journal Ecotone, he teaches at the University of North Carolina at Wilmington.

"A wonderfully readable book. Gessner’s attempts to define the role of the new environmental warrior, both in terms of idealism and political practicality, are heartfelt and informed. [My Green Manifesto] is brave enough and intelligent enough to embrace technology as well as art, pure ideology as well as compromise, hope as well as despair, depression and paralysis as well as valor and joy." Boston Globe

"Raw and honest . . . there's a lilt in his jig that many will find invigorating." Los Angeles Times

"Funny and inspiring . . . Gessner believes that committing to a lifelong environmental fight is an act of personal fulfillment. [My Green Manifesto] is an easy, pleasurable read, with an environmental message that . . . there is still transcendence to be found in the 'limited wild' of our own communities. So get out there, enjoy it, and fight for it before it's gone because, at least according to Gessner, this is the key to a better life." Publishers Weekly (STARRED REVIEW)

David Gessner is a major American writer in possession of the most hard-headed, pragmatic, passionate, and eloquent style of thinking and writing on what it means to be a human on Earth today.” Brad Watson, author of The Heaven of Mercury

Gessner has chopped down the strangling beanstalk of environmentalism, and has merrily, adroitly, hungrily planted something new in its place. His book comes just in time: After talking with environmental experts and reading the direst of scientific journal articles, I was starting to feel the mind-numbing grip of paralysis. But before you put a bullet through your head for the plight of Mother Earth, you should read this book. Gessner is not saying anybody is off the hook, but he offers a more effective way of relating to natureno, in fact, of being nature.” Craig Childs, author of The Animal Dialogues

David Gessner re-invents the environmental manifesto for people who hate the word environmental as much as they hate the word manifesto. Make no mistakehe can write about a blue heron or an osprey with the best of thembut if you're looking for mystical rhapsodies to Mother Earth, go elsewhere. Gessner is convinced that re-connecting ourselves with nature doesn't start with finger-wagging; it starts with fun.” Ginger Strand, author of Inventing Niagara

An engaging book with a serious message.” Kirkus Reviews

"Earthy and funny, frank and pragmatic. Gessner asserts that nature is necessary for our well-being, that 'the most important wilderness is rooted not in theory, renunciation, or gloom but, rather, in love and wonder, even anger. Take a 'good walk,' he advises, and be willing to fight and hustle for the place you love." Donna Seaman, Booklist