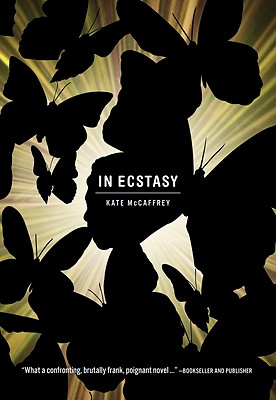 A best friend sinks into a quicksand of teenage addictions.

Sophie and Mia have been best friends for most of their 15 years. Sophie is popular, so when she suggests they try ecstasy Mia figures it can't hurt her own chances with the in crowd. Mia is elated when the drug lives up to its name and amazed when Lewis, the hottest guy in school, kisses her goodnight.

Soon Lewis is Mia's boyfriend, and she and Soph are running with his fast, rich friends, until Sophie is sexually assaulted by Lewis's drug-dealing buddy. Reluctant to say what happened, Sophie grows distant, leaving Mia to conclude she's jealous of her popular boyfriend. But to keep Lewis's attention, Mia grows increasingly dependent on the confidence that only E seems to give her. When things worsen, it is the girls' strained but solid friendship that finally helps bring Mia back from the brink.

Powerfully told from the alternating points of view of each girl, In Ecstasy is a brutally frank and utterly convincing portrait of the challenges facing contemporary teens.

Kate McCaffrey is a former high school teacher and the award-winning author of one other book for young adults.