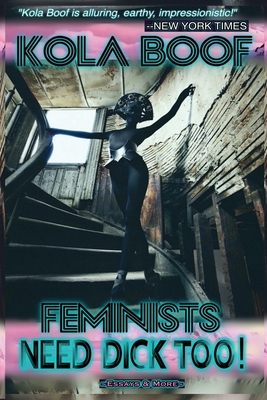 Critically acclaimed yet embattled novelist KOLA BOOF ("The Sexy Part of the Bible", "Diary of a Lost Girl", "Flesh and the Devil") tells us how she really feels in this brutally honest deeply personal Black Girl sex memoir that bravely exposes the differences between African Feminism, Black Womanism and White American Feminism. Ultimately the book is a manifesto appealing to all women of any race, any sexuality and even includes legitimate representation of Transwomen.

Ms. Boof starts with the question: "What if I had a daughter? What would I tell her about being a Woman and surviving in this world?"

After being married to two millionaires (one Black, one White) and dating quite the list of male celebrities (Boof tries to downplay her history with Osama Bin Laden, however); Kola Boof definitely sounds like an expert on these matters and is one of the most entertaining wisdom-sharing public figures in literature today. It's a shame that corporate smear campaigns targeted at Boof after the Bin Laden scandal, Xenophobia and Ms. Boof's personal beef with U.S. White Media has relegated her to being something of an underground sensation. Truly, her level of talent and intellect deserves more attention.

It's impossible to agree with everything Boof writes here. I have a few bones to pick with her. But her penchant for making us talk about topics we ordinarily wouldn't dare debate in public has become legendary. "Feminists Need Dick Too " Strikes me as both the perfect beach read for young thinking women and confirmation for much older Black women that they were right about certain things all along.

Men who are secure within themselves will love and enjoy the book as well.