All Quiet on the Western Front (Compact Disc) 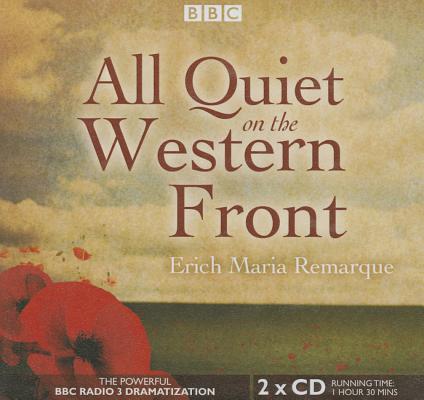 First published as a novel in 1929, "All Quiet on the Western Front" tells the story of a group of young German soldiers who are enduring, and then coming to terms with, the realities of the First World War.

At the age of nineteen, following the outbreak of World War I, Paul Baumer enlists in the German Army. He is deployed to the Western Front, where the experience of life and death in the trenches has an enormous effect on him. He begins to feel disconnected from his past life: his family, his love of poetry, and his feelings. As the war progresses, Paul becomes increasingly lost in battle.

Haunting yet comic, lyrical yet desperate, the novel became a bestseller on its original publication. It inspired an Oscar-winning film of the same name and has been adapted for television and stage. This powerful radio dramatization stars Robert Lonsdale as Paul Baumer, with a supporting cast including Simon Trinder, Stephen Critchlow, Carolyn Pickles, and Malcolm Tierney.