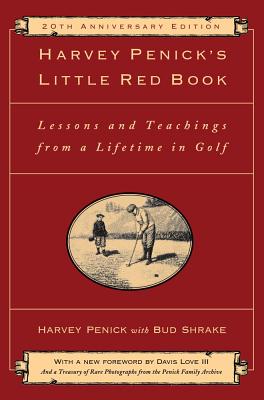 The twentieth anniversary edition of this classic work—the bestselling golf instruction book of all time and hailed as “the golfer's equivalent of The Elements of Style” (The New York Times)—includes a new introduction by a prominent golfer, twenty new illustrations, and never-before-published materials from the Penick family archives.

The most beloved golf book of all time, Harvey Penick’s Little Red Book has become required reading for all players and fans of the game, from beginners to seasoned pros.

The legendary Harvey Penick, whom Sports Illustrated called the “Socrates of the golf world,” began his golfing career as a caddie in Austin, Texas, at the age of eight, and over the course of nearly a century worked with an amazing array of champions. In this classic book, which is named for the red notebook he always kept, Penick’s simple, direct, practical wisdom pares away the hypertechnical jargon that’s grown up around the golf swing, and lets all golfers, whatever their level, play their best.

Harvey Penick lives in Austin, Texas, with his wife Helen. This is his first book.

Davis Love III has won 20 PGA Tour titles, including the 1997 PGA Championship, and the 1992 and 2003 Players Championships. He regularly represents the United States in team competitions like the Ryder Cup, for which he is the 2012 captain, and the President’s Cup and currently ranks fifth on the all-time career money list. He is the author of Every Shot I Take and lives in St. Simons Island, Georgia, with his wife and children.

“The golfer’s equivalent of The Elements of Style.” —The New York Times

“There are a million golf instruction books, but Penick’s . . . is the best—and the most widely read—book in sports. His innovation? Golfers need to keep it simple.” —Golf Digest

“Some sixty years worth of wisdom . . . from anecdotes to maxims, delivered in a pithy, down-to-earth manner. . . . His teaching offers hope that at least some of our crookedness can be made straight.” —The New York Times Magazine