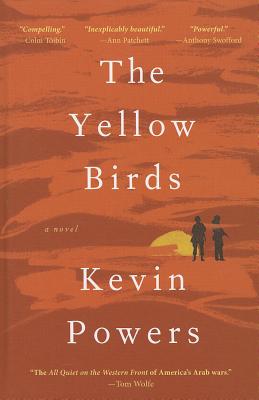 By Kevin Powers
Email or call for price

“The Yellow Birds should be required reading for the President, the Congress, and the entire Military Industrial Complex. Powers' novel describes in lyrical language the intensity and the confusion of war. Young men who have barely left boyhood face battle for the first time in Iraq, a country and a people that they know little about. For those fortunate enough to return home, the war comes with them and affects their families as well. In eloquent prose, Iraq war veteran Powers unveils the hidden costs of war for the average American. Truthful and painful, The Yellow Birds will join the classics of war fiction.”
— Joan Grenier, Odyssey Bookshop, South Hadley, MA

"The war tried to kill us in the spring," begins this breathtaking account of friendship and loss. In Al Tafar, Iraq, twenty-one-year old Private Bartle and eighteen-year-old Private Murphy cling to life as their platoon launches a bloody battle for the city. In the endless days that follow, the two young soldiers do everything to protect each other from the forces that press in on every side: the insurgents, physical fatigue, and the mental stress that comes from constant danger.
Bound together since basic training when their tough-as-nails Sergeant ordered Bartle to watch over Murphy, the two have been dropped into a war neither is prepared for. As reality begins to blur into a hazy nightmare, Murphy becomes increasingly unmoored from the world around him and Bartle takes impossible actions.
With profound emotional insight, especially into the effects of a hidden war on mothers and families at home, THE YELLOW BIRDS is a groundbreaking novel about the costs of war that is destined to become a classic.

Kevin Powers joined the army at the age of 17, later serving a year as a machine gunner in Mosul and Tal Afar, Iraq in 2004 and 2005. After his honorable discharge, he muddled through a series of jobs, but eventually quit the last of them and enrolled in Virginia Commonwealth University, where he graduated in 2008 with a Bachelor's degree in English. He is currently a Michener Fellow in Poetry at the University of Texas at Austin, where he will receive his M.F.A. in 2012.