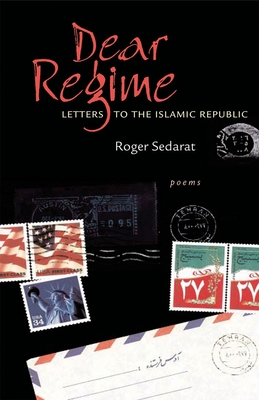 
In his provocative, brave, and sometimes brutal first book of poems, Roger Sedarat directly addresses the possibility of political change in a nation that some in America consider part of “the axis of evil.” Iranian on his father’s side, Sedarat explores the effects of the Islamic Revolution of 1979 — including censorship, execution, and pending war — on the country as well as on his understanding of his own origins.

Written in a style that is as sure-footed as it is experimental, Dear Regime: Letters to the Islamic Republic confronts the past and current injustices of the Iranian government while retaining a sense of respect and admiration for the country itself. Woven into this collection are the author’s vivid descriptions of the landscape as well as the people of Iran. Throughout, Sedarat exhibits a keen appreciation for the literary tradition of Iran, and in making it new, attempts to preserve the culture of a country he still claims as his own.

Roger Sedarat is an assistant professor of English at Borough of Manhattan Community College/City University of New York. He is the recipient of scholarships to the Bread Loaf Writers’ Conference as well as a St. Botolph Society poetry grant. His verse has appeared in such journals as New England Review, Atlanta Review, and Poet Lore.

“This is poetry that requires not only conscience but courage.”
—David Lehman

“We can only hope the regime will welcome the humanity and talent so palpable in this book, which we in the U.S. should gratefully welcome, too.”
— The Ledge

“Dear Regime is a stunning collection of poems that vividly captures all aspects of the Iranian culture.”
— Nahid Rachlin, author of Persian Girls and Jumping over Fire

“Roger Sedarat mixes the surreal with the actual in a poetic landscape that is as terrifying as it is stunning.”
— Kimiko Hahn, author of The Narrow Road to the Interior