What Were They Thinking?: Crisis Communication: The Good, the Bad, and the Totally Clueless (Hardcover) 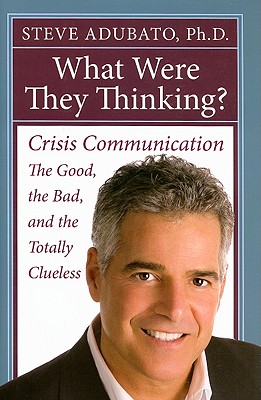 By Steve Adubato
Email or call for price

Some corporations spend millions of dollars on so-called "crisis communication plans." Others offer lip service, avoiding the subject like the plague. They simply hope for the best, praying that they never face a crisis. Either way, as Steve Adubato says, "Wishful thinking is no substitute for a strategic plan."

Nationally recognized communication coach and four-time Emmy Awardûwinning broadcaster Steve Adubato has been teaching, writing, and thinking about comm¡unication, leadership, and crisis communication for nearly two decades. In What Were They Thinking? Adubato examines twenty-two controversial and complex public relations and media mishaps, many of which were played out in public. Among cases and people discussed are:

Arranged in short chapters detailing each case individually, the book provides a brief history of the topics and answers the questions: Who got it right? Who got it wrong? What can the rest of us learn from them?

Steve is a media expert, a street-smart guy with powerful insight that makes this book so relevant for our time.
— Ernie Anastos

Heaven forbid you should find yourself or your company with a public relations crisis on your hands. But if you do, Steve Adubato has a wealth of common sense for how to weather the storm with a minimum of damage.
— Jim Willse

Steve Adubato is one of my favorites. He has a clear point of view and isn't afraid to share it, particularly when it comes to media issues and media coverage of important stories.
— Joe Scarborough