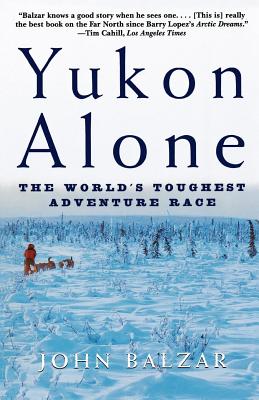 In the tradition of Into the Wild, John Balzar's Yukon Alone is a story of daring and determination in one of nature's harshest, loneliest, and most beautiful places.

The Yukon Quest International Sled Dog Race is among the most challenging and dangerous of all the organized sporting events in the world. Every February, a handful of hardy souls sps over two weeks racing sleds pulled by fourteen dogs over 1,023 miles of frozen rivers, icy mountain passes, and spruce forests as big as entire states. It's not unusual for the temperature to drop to 40-below or for the night to be seventeen hours long.

Why would anyone want to run this race? To find out, John Balzar moved to Alaska months before The Quest began and he spent time in the homes of many of the mushers. Balzar then spent many days and nights on the trail, and the result is a book that not only treats us to a vivid day-by-day account of the grueling race itself but also offers an insightful look at the men and women who have moved to this rugged and beautiful place, often leaving behind comfortable houses and jobs in the lower forty-eight states for the sense of exhilaration they find in their new lives. Readers will also be fascinated by Balzar's account of what goes into the training and care of the majestic dogs who pull the sleds and whose courage, strength, and devotion make them the true heroes of this story.

For anyone captivated by the wild north country, this riveting tale of courage and adventure will inspire and entertain.

John Balzar, a roving correspondent for the Los Angeles Times, was awarded the Scripps Howard Foundation Prize for human interest writing. Balzar has worked as a river boatman in Alaska and sailed across the Pacific. He lives in Portland, Oregon.

“A fascinating, brutally honest look at a culture bound only by the will and strength of those who embrace it.” —People

“[Balzar's] wonderful account of the Yukon Quest is a treat without the frostbite.” —The Seattle Times

“Balzar brings the contest alive in stirring prose that ss tingles up your spine.” —USA Today

“...This is one man-against-nature battle that has found its bard.” —Entertainment Weekly