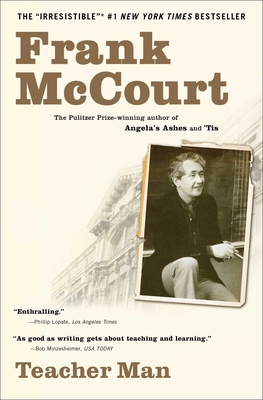 From the Pulitzer Prize-winning, mega-bestselling author who wore his celebrity with extraordinary grace comes a magnificently appealing book about teaching and about how one great storyteller found his voice.

Frank McCourt became an unlikely star when, at the age of sixty-six, he burst onto the literary scene with Angela's Ashes, the Pulitzer Prize-winning memoir of his childhood in Limerick, Ireland. Then came 'Tis, his glorious account of his early years in New York.

Now, here at last is McCourt's long-awaited book about how his thirty-year teaching career shaped his second act as a writer. Teacher Man is also an urgent tribute to teachers everywhere. In bold and spirited prose featuring his irreverent wit and compelling honesty, McCourt records the trials, triumphs and surprises he faced in the classroom. Teacher Man shows McCourt developing his unparalleled ability to tell a great story as, five days a week, five periods per day, he worked to gain the attention and respect of unruly, hormonally charged or indifferent adolescents.

For McCourt, storytelling itself is the source of salvation, and in Teacher Man the journey to redemption -- and literary fame -- is an exhilarating adventure.

Frank McCourt (1930–2009) was born in Brooklyn, New York, to Irish immigrant parents, grew up in Limerick, Ireland, and returned to America in 1949. For thirty years he taught in New York City high schools. His first book, Angela’s Ashes, won the Pulitzer Prize, the National Book Critics Circle Award, and the Los Angeles Times Book Award. In 2006, he won the prestigious Ellis Island Family Heritage Award for Exemplary Service in the Field of the Arts and the United Federation of Teachers John Dewey Award for Excellence in Education.

"Full of gritty specifics, never preachy, often hilarious, McCourt's third book thrusts you right into the hormones-and-catcalls chaos of the classroom. . . . Along the way, we get the best self-portrait of a public school teacher ever written." -- Malcolm Jones, Newsweek

"Teacher Man is, in fact, the best book in the trilogy, an enthralling work of autobiographical storytelling." -- Phillip Lopate, Los Angeles Times

"A beguiling, moving story. . . . McCourt describes the teacher we all wish we'd had." -- Ron Charles, The Washington Post

"Frank McCourt has done it again.... Teacher Man is an irresistible valedictory, about a man finding his voice in the classroom, on the page and in his soul." -- Ben Yagoda, The New York Times Book Review*

"As good as writing gets about teaching and learning." -- Bob Minzesheimer, USA TODAY