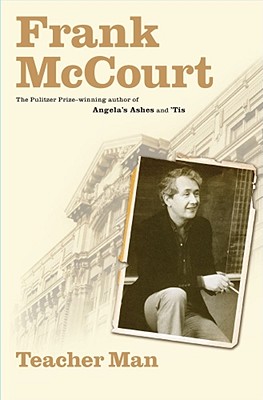 By Frank McCourt
$26.00
Email or call for price

Nearly a decade ago Frank McCourt became an unlikely star when, at the age of sixty-six, he burst onto the literary scene with Angela's Ashes, the Pulitzer Prize -- winning memoir of his childhood in Limerick, Ireland. Then came 'Tis, his glorious account of his early years in New York.

Now, here at last, is McCourt's long-awaited book about how his thirty-year teaching career shaped his second act as a writer. Teacher Man is also an urgent tribute to teachers everywhere. In bold and spirited prose featuring his irreverent wit and heartbreaking honesty, McCourt records the trials, triumphs and surprises he faces in public high schools around New York City. His methods anything but conventional, McCourt creates a lasting impact on his students through imaginative assignments (he instructs one class to write "An Excuse Note from Adam or Eve to God"), singalongs (featuring recipe ingredients as lyrics), and field trips (imagine taking twenty-nine rowdy girls to a movie in Times Square!).

McCourt struggles to find his way in the classroom and spends his evenings drinking with writers and dreaming of one day putting his own story to paper. Teacher Man shows McCourt developing his unparalleled ability to tell a great story as, five days a week, five periods per day, he works to gain the attention and respect of unruly, hormonally charged or indifferent adolescents. McCourt's rocky marriage, his failed attempt to get a Ph.D. at Trinity College, Dublin, and his repeated firings due to his propensity to talk back to his superiors ironically lead him to New York's most prestigious school, Stuyvesant High School, where he finally finds a place and a voice. "Doggedness," he says, is "not as glamorous as ambition or talent or intellect or charm, but still the one thing that got me through the days and nights."

For McCourt, storytelling itself is the source of salvation, and in Teacher Man the journey to redemption -- and literary fame -- is an exhilarating adventure.

Frank McCourt (1930–2009) was born in Brooklyn, New York, to Irish immigrant parents, grew up in Limerick, Ireland, and returned to America in 1949. For thirty years he taught in New York City high schools. His first book, Angela’s Ashes, won the Pulitzer Prize, the National Book Critics Circle Award, and the Los Angeles Times Book Award. In 2006, he won the prestigious Ellis Island Family Heritage Award for Exemplary Service in the Field of the Arts and the United Federation of Teachers John Dewey Award for Excellence in Education.

"Moving out of the poor Irish lanes of his childhood and now into the high school classrooms of New York City, Frank McCourt exchanges one garden of suffering for another, but always with a comic eye, a sympathetic heart, and the perfect timing of a master story-teller. Teacher Man is a cry from the barricades of public education and should be required reading not just for all teachers but for anyone who ever set foot in a high school. Happily, there will be no test."
-- Billy Collins