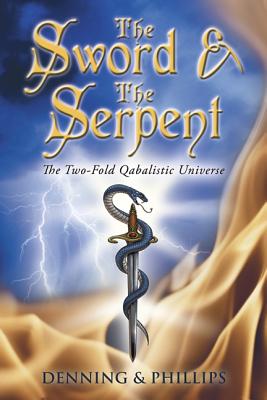 On Our Shelves Now (Subject to Availability)
This title is NON-RETURNABLE.

This is book number 2 in the Magical Philosophy series.

This highly regarded text is a cornerstone among ceremonial magicians and occultists worldwide. The Sword & the Serpent expounds upon the principles of ceremonial magic and its relationship to the teachings of Qabalah. This volume, the second volume of The Magical Philosophy Series, presents the external Qabalistic universe and the internal Qabalistic universe; together, the two-fold universe--that which surrounds us, and the universe of the psyche within.

It is the ultimate integration of the outer world and inner world that is the Great Work and purpose of High Magic. The essential structures of outer and inner worlds are here conceived of in parallel terms, seen through one common comprehensive framework, and their integration is thus revealed as comprehensible and progressive gnosis. For the magician, this is the key to learning to use the psyche, or inner world, to control and direct the forces of the outer worlds of being. Thus, and only thus, do we fulfill our destiny and become masters of our fate.