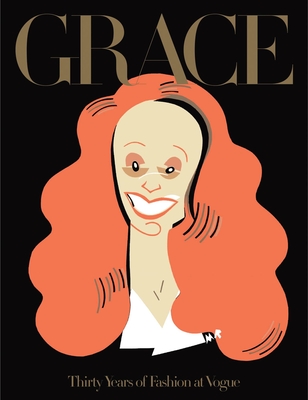 By Grace Coddington
$59.95
Email or call for price.

A chronicle of Grace Coddington's formative years at Vogue, now available as a jacketed paperback

Grace: Thirty Years of Fashion at Vogue showcases some of the most memorable photographs published in British and American Vogue from 1972 to 2002, stories created by the iconic fashion editor Grace Coddington. Both monograph and memoir, the book shows how Coddington transformed static studio portraiture into modern vivid tableaux and turned location shoots into cinematic narratives.

After a successful modelling career, Grace Coddington became a fashion editor at British Vogue in 1968. In 1988 she joined American Vogue with Anna Wintour and soon after was named the magazine's creative director. In 2016 she became Vogue's creative director-at-large, allowing her to pursue independent projects including developing her own perfume, Grace by Grace Coddington, with Comme des Garçons.

"Memorable photographs slice their identities into the imagination. In this book one is sure to find such images... Unerringly lavish and unashamedly glossy."—The Lady

"Her very own fashion bible! Naomi Campbell and Christy Turlington star in stunning photos featured in a book marking creative director Grace Coddington's 30 years at Vogue... Showcases some of the most influential photographs published in British and US Vogue from 1972 to 2002... The volume opens with a foreword written by [...] US Vogue editor-in-chief Anna Wintour, who brands Coddington as a 'legend' with 'the best eye in the business'."—Dailymail.co.uk

Praise for the hardback edition:

"If [Anna] Wintour is the Pope, Coddington is Michelangelo, trying to paint a fresh version of the Sistine Chapel 12 times a year."—Time

"Genius is a word that gets thrown around a lot. But when it's applied to Grace Coddington, creative director at US Vogue, who has shaped the look of the magazine (and therefore your wardrobe) for three decades, it doesn't go far enough. We refer you to the new book Grace as proof."—Sunday Telegraph

"An essential read for anyone in love with fashion as art."—LuisaWorld.com

"This is escapism at its finest. A flip-through this book will remind you of the true definition of style."—Forbes Online