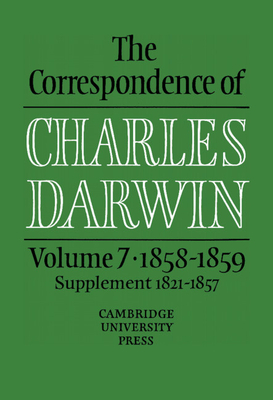 The seventh volume of The Correspondence of Charles Darwin covers two of the most momentous years in Darwin's life and in the history of science. Begun in 1856, Darwin's big book on species, later published as Natural Selection (Cambridge University Press, 1974) was a little more than half finished when Darwin unexpectedly received a letter and a manuscript from Alfred Russel Wallace indicating that he too had independently formulated a theory of natural selection. In a letter to his friend, Charles Lyell, Darwin wrote, So all my originality, whatever it may amount to, will be smashed. On the Origin of Species was an abstract of the larger manuscript and was published in 1859. All the extant correspondence surrounding Darwin's receipt of Wallace's letter and the eventual publication of the abstract of Darwin's theory a year later is gathered in this volume. The letters detail the stages in the preparation of what was to become one of the world's most famous works, On the Origin of Species by Means of Natural Selection. They reveal the first impressions of Darwin's book given by his confidants; including Joseph Dalton Hooker, Thomas Henry Huxley, and Asa Gray. Finally, the letters relate Darwin's anxious response to the early reception of this theory by friends, family members, and prominent naturalists. This volume provides the key to understanding Darwin's remarkable efforts for more than two decades to solve one of nature's greatest riddles--the origin of species. This volume also contains a supplement (1821-1857) of letters which have been located or redated since publication of Volumes One to Six of the Correspondence. Many of these letters appear in print for the first time and provide an interesting and important complement to the correspondence published to date.