In the Shadow of Slavery: Africa’s Botanical Legacy in the Atlantic World (Paperback) 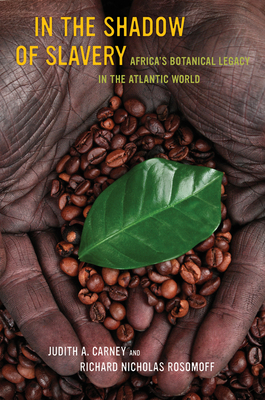 The transatlantic slave trade forced millions of Africans into bondage. Until the early nineteenth century, African slaves came to the Americas in greater numbers than Europeans. In the Shadow of Slavery provides a startling new assessment of the Atlantic slave trade and upends conventional wisdom by shifting attention from the crops slaves were forced to produce to the foods they planted for their own nourishment. Many familiar foods—millet, sorghum, coffee, okra, watermelon, and the “Asian” long bean, for example—are native to Africa, while commercial products such as Coca Cola, Worcestershire Sauce, and Palmolive Soap rely on African plants that were brought to the Americas on slave ships as provisions, medicines, cordage, and bedding. In this exciting, original, and groundbreaking book, Judith A. Carney and Richard Nicholas Rosomoff draw on archaeological records, oral histories, and the accounts of slave ship captains to show how slaves' food plots—“botanical gardens of the dispossessed”—became the incubators of African survival in the Americas and Africanized the foodways of plantation societies.

Judith A. Carney is Professor of Geography at the University of California, Los Angeles. She is the author of the award-winning book Black Rice: The African Origins of Rice Cultivation in the Americas. Richard Nicholas Rosomoff is an independent writer.

“In the Shadow of Slavery is thorough, cogent, creative in its use of scarce historical materials, and beautifully illustrated with color plates.”
— International Journal of African Historical Studies

“Professor Moykr has presented us with a useful, entertaining, and exacting analysis of those theories and debates that have engaged economic historians for the last quarter-century.”
— Technology qnd Culture

“Groundbreaking. . . . Carney and Rosomoff present clear evidence and forceful arguments. . . . This informative and enjoyable book offers not your regular meat and potatoes, but collard greens, cornbread, and gumbo.”
— Journal of African American History

“Carney and Rosomoff have written a book that is essential to any environmentally informed study of slavery in the Americas.”
— Isle: Interdisciplinary Studies in Literature and Environment

“Carney and Rosomoff have crafted an engaging and compelling narrative that opens our eyes and awakens our palates to the multiple ways in which our American foodways have been fundamentally shaped by Africa and Africans. . . . highly recommend[ed].”
— Economic Botany