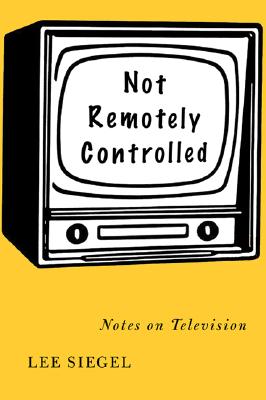 Television has taken firm hold of American life ever since the first flickering images replaced the disembodied voices innocently crackling from the radio. Ever present and evolving, television thrives at the crossroads of commerce, art, and entertainment. In Not Remotely Controlled cultural critic Lee Siegel collects his reportage and musings on this most hybrid medium. Whether chronicling the history of the "cop" drama, revealing the inherent irony in Donald Trump's character on "The Apprentice," or shedding light on those unheralded gems that Neilsen ratings swept away prematurely, Siegel gives each episode, series, or documentary the attention and respect usually reserved for high-art and dusty literature. Going far beyond mere pans and praise, Siegel has given long-overdue attention to America's most pervasive art form: television.

Lee Siegel is a renowned critic and essayist whose writing appears in Harper's, The New Republic, Time, The Atlantic Monthly, The New Yorker, among other publications. He received the 2002 National Magazine Award for Reviews and Criticism. He is the author of Falling Upwards. Siegel is a senior editor at The New Republic. He lives with his wife and child in New York City.