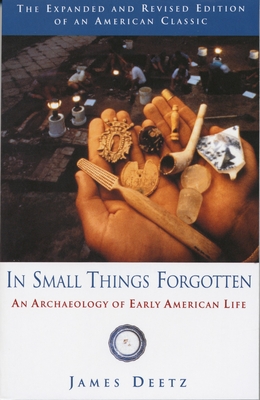 History is recorded in many ways. According to  author James Deetz, the past can be seen most fully  by studying the small things so often forgotten.  Objects such as doorways, gravestones, musical  instruments, and even shards of pottery fill in the  cracks between large historical events and depict  the intricacies of daily life. In his completely  revised and expanded edition of In Small  Things Forgotten, Deetz has added new  sections that more fully acknowledge the presence  of women and African Americans in Colonial  America. New interpretations of archaeological finds  detail how minorities influenced and were affected  by the development of the Anglo-American tradition  in the years following the settlers' arrival in  Plymouth, Massachusetts in 1620. Among Deetz's  observations:
Subtle changes in building long before the  Revolutionary War hinted at the growing independence  of the American colonies and their desire to be  less like the  British.

Records of estate auctions show that many  households in Colonial America contained only one  chair--underscoring the patriarchal nature of the  early American family. All other members of the  household sat on stools or the  floor.

The excavation of a tiny community of  freed slaves in Massachusetts reveals evidence of  the transplantation of African culture to North  America.

Simultaneously  a study of American life and an explanation of  how American life is studied, In Small  Things Forgotten, through the everyday  details of ordinary living, colorfully depicts a  world hundreds of years in the past.

James Deetz died in November 2000. Patricia Scott Deetz is a cultural historian with an MA in history from Rhodes University, South Africa. She lives in Charlottesville, Virginia.