The Eight: A Season in the Tradition of Harvard Crew (Hardcover) 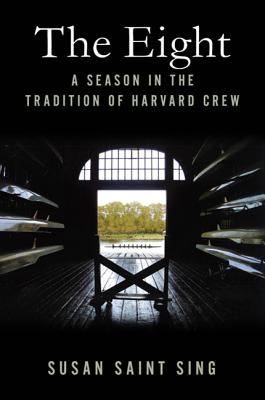 The Eight is a thrilling, behind-the-scenes look at a group of young men who have given up nearly everything to transform themselves into the best team possible at arguably the world's most venerable rowing institution, Harvard crew. Through a blend of journalistic writing and historical narrative, Saint Sing highlights their struggles and triumphs as she follows them through the spring season of 2008.

This exclusive, competitive world is illuminated as never before as the athletes race for the collegiate national championship and one former member achieves a historic first for Harvard: a gold medal at the 2008 Olympic Games.

What these men go through physically to earn a seat in the Harvard first eight is just the beginning. The real test of their mettle is the inner athlete called upon to make their dreams a reality in this very tense and dramatic world. The Eight chronicles the drama of a full season of elite college racing, including the bitter personal struggles and the team's pursuit of excellence.

Susan Saint Sing has both competed in and coached rowing at the college and national level, and is an authority on rowing history. She was a member of the 1993 US World Rowing Team and lives in Stuart, Florida.

“At last, a rare and hotly anticipated opportunity to peek beneath the kimono of Harvard crew.” —Brad Alan Lewis, Olympic Gold Medalist and subject of David Halberstam's The AMATEURS

“I am sure Harvard as a family and Coach Parker will appreciate this sensitive effort. It is as fine a piece as I've ever seen written about a crew and their heritage and ethic. Susan is a sponge of rowing lore, a super magnet of issues that are important, and a loyal friend of all those who ply the water for speed or for personal enlightenment. She gives us balance often when winning is catching up with humanity.” —Ted Nash, Olympic Rowing Gold Medalist and 15-time U.S. Olympian.