Halley's Quest: A Selfless Genius and His Troubled Paramore (Hardcover) 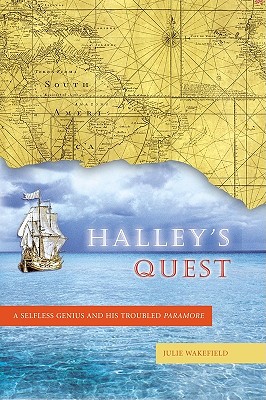 By Julie Wakefield
$27.95
Email or call for price.

For most people, Edmond Halley is best known for accurately predicting the periodic appearance of the comet that ultimately would bear his name. But his greatest achievement may have been overlooked? indeed few people know that it was Halley who solved the riddle of accurate navigation for all sea-going vessels.

As seventeenth-century scientists gradually came to believe that the inside of the Earth was magnetized they were puzzled by the fact magnetic north not only varied slightly from place to place, but gradually changed over time, suggesting a slow variation of the Earth's magnetic field. But if the Earth was permanently magnetized, how could its magnetism vary? Edmond Halley, Britain's Astronomer Royal, ingeniously proposed that the Earth contained a number of spherical shells, one inside the other, each magnetized differently, each slowly rotating in relation to the others. This brilliant deduction earned Halley the command of a small sailing ship, the 52-foot Paramore, and with it, a royal mandate. Halley was to sail forth to stand so far into the South, till you discover the Coast of the Terra Incognita. But more importantly, determine the variation between true and magnetic north in order to more accurately calculate longitude?a feat that would improve Britain's navigational skills and ensure its dominance of the high seas.

Halley's Quest takes readers on a trilogy of sea voyages, each of which proved to be as novel and revealing as it was difficult and controversial. But more than a yarn of risk and adventure, the story at the core of the book is a deeply personal and intellectual tale that captures the science and the spirit of an almost forgotten episode in the history of navigation. Once branded a heretic by the Church and denied a prestigious scholarly chair at Oxford University, Halley ultimately changed the course of science, producing charts that described more accurate ways to navigate and documenting new geophysical phenomena ranging from ocean patterns to the motion of Jupiter's moons. This delightful book emphasizes the drama of Halley's mission and the passion of an era hungry for the stories science had to tell.