The Good, the Bad, and the Barbie: A Doll's History and Her Impact on Us (Paperback) 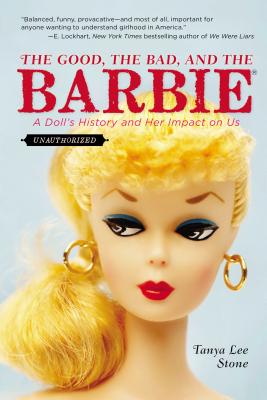 "Balanced, funny, provocative—and most of all, important for anyone wanting to un­derstand girlhood in America."—E. Lockhart, New York Times bestselling author of We Were Liars

Barbie just might be the most famous doll in the world. She has represented fifty different nationalities. She’s stepped into the always-fashionable shoes of more than one hundred twenty careers. She has been played with, studied, celebrated, and criticized for more than fifty years. And she has unquestionably influenced generations of girls—whether that influence has been positive or negative depends on whom you ask.

Acclaimed nonfiction author Tanya Lee Stone takes an unbiased look at how Barbie became the icon that she is. Part biography—both of the doll and of her inventor, Ruth Handler—and part exploration of the cultural phenomenon that is Barbie, The Good, the Bad, and the Barbie is filled with personal anecdotes, memories, and opinions from people of all ages. Featuring original color and black-and-white photographs, this book is for everyone who understands that we’re all living in a Barbie world.


"This is no mere Barbie book. This is a how-to manual about being a girl."—Lauren Myracle, New York Times bestselling author

* "Source notes, a bibliography, and lots of images, including an inset of color photos, add to an offering that pleases and intrigues." —Booklist, starred review

Tanya Lee Stone is an award-winning author whose works have received critical acclaim and accolades including ALA’s Sibert Medal (for informational text) and SCBWI’s Golden Kite Award. She is also the author of the YALSA Award Finalist for Excellence in Nonfiction, Almost Astronauts: 13 Women Who Dared to Dream. She lives in Burlington, Vermont.

Winner of the Golden Kite Award

“History writers don’t get better than Tanya Lee Stone. The Good, the Bad, and the Barbie is balanced, funny, provocative—and most of all, important for anyone wanting to understand girlhood in America.”—E. Lockhart, New York Times bestselling author of We Were Liars

“This is no mere Barbie book. This is a how-to manual about being a girl: a strong, sparky, awesome girl, with Barbie in hand or in the nearest deumpster!”—Lauren Myracle, New York Times bestselling author

* “Stone has done her homework and offers a particularly well-researched read. But she has also gotten many women (and men) to reminisce, comment, and argue about Barbie, and these voices add sparkle.”—Booklist, starred review

* “Stone reveals the pathos behind so many relationships of girls with Barbie: those who cherished her and those who were negatively influenced…In this balanced overview, both sides of the quandary are addressed...  Accessible…and includes extensive source notes and bibliographical information.”—School Library Journal, starred review

* "Stone tantalizes with her intriguing survey of Barbie. indicating an audience of teens and adults rather than children. The striking cover, open design with numerous photographs and collegial voice will appeal to younger readers.”—Kirkus Reviews, starred review

"Stone calmly covers Barbie's creation by Ruth Handler, the formation of Mattel, and the doll's unpromising launch among sexpot-resistant buyers at a national toy fair. From there on, though, the gloves come off, and Stone allows the voices of women and teens, scholars and collectors, lovers and haters to thrash out whether Barbie has single-handedly set an unattainable standard of female beauty, joined forces with manipulative media to trash adolescent self-esteem, acted as the progressive model for girls to envision gender barrier-crashing careers, or reigned as-duh-just a really cool doll with really pretty clothes…Notes, index, and an extensive bibliography may lure report writers into unconsidered territory, and teen book clubs might want to nominate this as a fiery nonfiction selection.”—BCCB

“Stone takes an unapologetic look at Barbie's life, documenting the changes in Barbie through the years, her impact on society and the numerous controversies surrounding her existence.”—Children’s Literature

“Filled with photographs of Barbie dolls past and present as well as quotes about her from nationally known figures and children alike, Stone's fascinating and balanced account reveals a toy of almost unmatched influence.”—Publishers Weekly