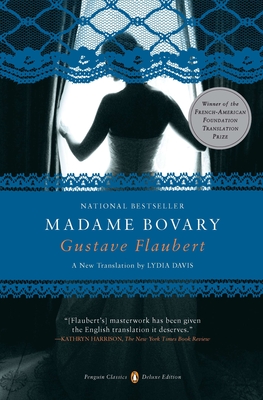 The award-winning, nationally bestselling translation, by Lydia Davis, of one of the world’s most celebrated novels

Emma Bovary is the original desperate housewife. Beautiful but bored, she spends lavishly on clothes and on her home and embarks on two disappointing affairs in an effort to make her life everything she believes it should be. Soon heartbroken and crippled by debts, she takes drastic action, with tragic consequences for her husband and daughter. In this landmark new translation of Gustave Flaubert's masterwork, award-winning writer and translator Lydia Davis honors the nuances and particulars of Flaubert's legendary prose style, giving new life in English to the book that redefined the novel as an art form.

For more than seventy years, Penguin has been the leading publisher of classic literature in the English-speaking world. With more than 1,700 titles, Penguin Classics represents a global bookshelf of the best works throughout history and across genres and disciplines. Readers trust the series to provide authoritative texts enhanced by introductions and notes by distinguished scholars and contemporary authors, as well as up-to-date translations by award-winning translators.

Gustave Flaubert (1821–1880) was born in Rouen, France, and was brought to popular attention when Madame Bovary was deemed immoral by the French government.

“Lydia Davis’s Madame Bovary translation=perfect. She somehow pulls off a respectful translation with the readability of a contemporary novel.” —@lenadunham

"[Flaubert's] masterwork has been given the English translation it deserves." —Kathryn Harrison, The New York Times Book Review

"Invigorating . . . [Davis] has a finer ear for the natural cadences of English, in narrative and dialogue, than any of her predecessors." —Jonathan Raban, The New York Review of Books

"Dazzling . . . translated to perfect pitch . . . [Davis has] left us the richer with this translation. . . . I'd certainly say it is necessary to have hers." —Jacki Lyden, NPR.org, Favorite Books of the Year

"One of the most important books of the year . . . Flaubert's strict, elegant, rhythmic sentences come alive in Davis's English." —James Wood, The New Yorker's Book Bench

"I liked having a chance to find more nuances in Madame Bovary in the new Lydia Davis translation and read it blissfully as though floating, as Flaubert puts it in a different context, 'in a river of milk.'" —Paul Theroux, The Guardian (London), Books of the Year

"Madame Bovary reads like it was written yesterday. . . . Emma, with her visions of a grander life and resplendent passions, is me . . . and you, too, no doubt. . . . If you haven't happened to read Madame Bovary until now, I suggest you curl up with this edition . . . and allow yourself to get lost in another time and place that yet bears a curious resemblance to our own." —Daphne Merkin, Elle

"Davis is the best fiction writer ever to translate the novel. . . . [Her] work shares the Flaubertian virtues of compression, irony and an extreme sense of control." —Julian Barnes, London Review of Books

"I'm grateful to Davis for luring me back to Madame Bovary and for giving us a version which strikes me as elegant and alive." —Maureen Corrigan, NPR's Fresh Air