Young Woman and the Sea [Movie Tie-in]: How Trudy Ederle Conquered the English Channel and Inspired the World (Paperback) 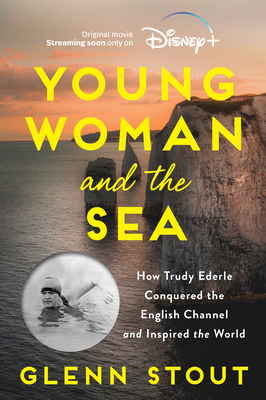 The exhilarating true story of Trudy Ederle, the first woman to swim the English Channel, and inspire a “wave of confidence and emancipation” for women in sports (Parade).

By age twenty, at the height of the Jazz Age, Trudy Ederle was the most accomplished swimmer in the world. She’d won Olympic gold and set a host of world records. But the greatest challenge remained: the English Channel. Only a few swimmers, none of them women, had ever made the treacherous twenty-one mile crossing. Trudy’s failed first attempt seemed to confirm what many naysayers believed: No woman could possibly accomplish such a thing.

In 1926, Ederle proved them wrong. As her German immigrant parents cheered her, and her sister and fellow swimmer Meg helped fashion both her scandalous two-piece swimsuit and leak-proof goggles, Trudy was determined to succeed. “England or drown is my motto,” she said, plunging into the frigid Channel for her second attempt at the crossing. Fourteen hours later, two hours faster than any man, and after weathering a gale and waves that approached six-feet, she stepped onto Kingsdowne Beach as the most famous woman in the world.

Based on years of archival research that unearthed Ederle’s memory from obscurity, Young Woman and the Sea brings to life the real Trudy Ederle, the challenges that came with her fame, and the historic mark her achievement made for all women athletes who followed.

Glenn Stout is a writer, author, and editor, and served as series editor of The Best American Sports Writing, and founding editor of The Year’s Best Sports Writing. He is also the author of Tiger Girl and the Candy Kid, Fenway 1912, Nine Months at Ground Zero, and many other award-winning and best-selling books. He also served as a consultant on the Disney+ film adaptation of Young Woman and the Sea. Stout lives in Lake Champlain in Vermont.

“Great storytelling. . .Stout’s moving book recovers the exhilarating story of a young girl who found her true self out in the water and paved the way for women in sports today." — Publishers Weekly (starred review)

“Stout adeptly traces the history of swimming and Ederle’s significance in it. Whether recounting the origins of modern strokes or the geological formation of the English Channel, the author is comprehensive in his research. His blow-by-blow accounts of Ederle’s two attempts to cross from Cape Gris-Nez, France to Dover, England, demonstrate his engaging style… saturated with thrills and melodrama. A compelling account of a woman who, though long forgotten, changed the way the world viewed swimming.” — Kirkus Reviews

"Young Woman and the Sea is the story of Gertrude Ederle’s epic swim across the English Channel interwoven with a sweeping and glimmering history of swimming. These were the good old days when open water swimmers were sex symbols, pioneers of the sport, and leaders of social change. For anyone who loves the water, or has a big dream—this is the book to read!" — Lynne Cox, author of Swimming to Antarctica and Grayson

"Too often, looking at America through its sports, and vice versa, results in a distorted view of both of them. In Glenn Stout's account of Trudy Ederle and the English Channel, we have a clear and honest mirror. Young Woman and the Sea is a first-rate piece of social history, and a tale told, well, swimmingly."  — Charles P. Pierce, author of Idiot America and Moving the Chains