Sisters in Law: How Sandra Day O'Connor and Ruth Bader Ginsburg Went to the Supreme Court and Changed the World (Paperback) 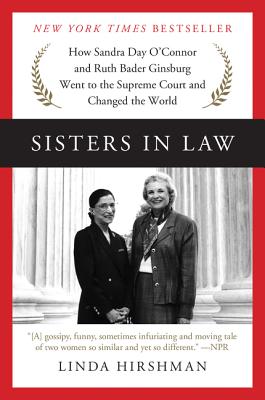 The author of the celebrated Victory tells the fascinating story of the intertwined lives of Sandra Day O’Connor and Ruth Bader Ginsburg, the first and second women to serve as Supreme Court justices.

The relationship between Sandra Day O’Connor and Ruth Bader Ginsburg—Republican and Democrat, Christian and Jew, western rancher’s daughter and Brooklyn girl—transcends party, religion, region, and culture. Strengthened by each other’s presence, these groundbreaking judges, the first and second to serve on the highest court in the land, have transformed the Constitution and America itself, making it a more equal place for all women.

Linda Hirshman’s dual biography includes revealing stories of how these trailblazers fought for their own recognition in a male-dominated profession—battles that would ultimately benefit every American woman. She also makes clear how these two justices have shaped the legal framework of modern feminism, including employment discrimination, abortion, affirmative action, sexual harassment, and many other issues crucial to women’s lives.

Sisters-in-Law combines legal detail with warm personal anecdotes that bring these very different women into focus as never before. Meticulously researched and compellingly told, it is an authoritative account of our changing law and culture, and a moving story of a remarkable friendship.

Linda Hirshman is a lawyer, a cultural historian, and the author of Victory: The Triumphant Gay Revolution and many other books. She received her JD from the University of Chicago Law School and her PhD in philosophy from the University of Illinois at Chicago, and has taught philosophy and women’s studies at Brandeis University. Her writing has appeared in the New York Times, the Washington Post, Slate, Newsweek, the Daily Beast, and POLITICO. She lives in Arizona and New York City.

“For anyone interested in the court, women’s history or both, the story of Sandra Day O’Connor and Ruth Bader Ginsburg, their separate routes to the Supreme Court and what they accomplished during the more than 12 years they spent together is irresistible.”
— New York Times Book Review

“Linda Hirshman’s joint biography of the first and second woman to serve on the nation’s highest court is a gossipy, funny, sometimes infuriating and moving tale of two women so similar and yet so different.”
— NPR

“Vital...Part of what makes Hirshman such a likable writer — in addition to her wit and ability to explain the law succinctly without dumbing it down — is her optimism.”
— Washington Post

“Fast-paced and sure-footed...persuasive...Hirshman’s ability to write clearly about the law without oversimplifying enables her to explain how O’Connor played defense and Ginsburg offense.”
— Huffington Post

“A lovely, thoughtful, and fascinating chronicle of [O’Connor and Ginzburg’s] careers and lives that doubles as a concise history of the fight for equality for women.”
— SCOTUS blog

For anyone interested in the court, women’s history or both, the story of Sandra Day O’Connor and Ruth Bader Ginsburg, their separate routes to the Supreme Court and what they accomplished during the more than 12 years they spent together is irresistible.
— Linda Greenhouse, New York Times Book Review

“Linda Hirshman’s joint biography of Sandra Day O’Connor and Ruth Bader Ginsburg is fascinating and informative but is also joyful -- a stirring reminder of how these two pioneers for women’s rights have advanced the cause in their singular but complementary ways.”
— Jeffrey Toobin, author of The Oath and The Nine

“A tale of two unfaltering women with steel-trap minds, their unlikely rapport, and the legal landscape they battle to reshape. Smart, startling, and profoundly moving.”
— Stacy Schiff, author of Cleopatra: A Life

“Linda Hirshman has written a thorough, accurate, and most readable account of the careers of the two first women to serve as Justices of the Supreme Court. Laymen as well as lawyers will learn a great deal, not only about these two special people, but about today’s Court as well.”
— Justice John Paul Stevens

“A riveting page-turner that will make you laugh, cry, and seethe with frustration at how long and hard the road to women’s equality has been. Above all, it will inspire and delight. A prodigious achievement and an important contribution to the history of our times.”
— Leslie Bennetts, author of The Feminine Mistake

“This sharply-drawn double portrait of the first and second women on the U.S. Supreme Court and the way their lives and legal philosophies complement and contrast with each other is riveting. Linda Hirshman has the unique ability to think like a law professor and write like a journalist.”
— Lynn Hecht Schafran, National Judicial Education Program, Legal Momentum