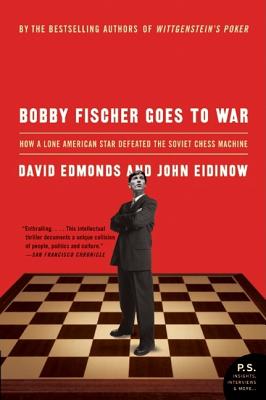 By the authors of the national bestseller Wittgenstein’s Poker, a riveting account of the legendary 1972 chess match between Boris Spassky, the world champion from the Soviet Union, and the American challenger Bobby Fischer

In the summer of 1972, with a presidential crisis stirring in the United States and the cold war at a pivotal point, the Soviet world chess champion Boris Spassky and his American challenger Bobby Fischer met in Reykjavik, Iceland for a chess match that held the world spellbound for two months with reports of psychological warfare, political intrigue, and cliffhangers. Thirty years later, David Edmonds and John Eidinow have set out to reexamine the story we recollect as the quintessential cold war clash between a lone American star and the Soviet chess machine. A mesmerizing narrative of hubris and despair, Bobby Fischer Goes to War is a biting deconstruction of the Bobby Fischer myth, a nuanced study on the art of brinkmanship, and a revelatory cold war tragicomedy.

David Edmonds is an award-winning journalists with the BBC. He's the bestselling authors of Bobby Fischer Goes to War and Wittgenstein’s Poker.

John Eidinow is an award-winning journalist with the BBC. He's the bestselling authors of Bobby Fischer Goes to War and Wittgenstein’s Poker.

“Readers will savor a marvelous portrait of East against West, with perceived societal superiority as the real prize.” — Kirkus Reviews

“[An] intriguing look at the world of competitive chess, circa 1972.... Good reading, especially for chess buffs.” — Booklist

“Bobby Fischer Goes to War tells the story in fine, brisk style…conveying the richness of the world beyond the chessboard.” — Time magazine

“[Edmonds and Eidinow] show themselves once again to be grandmasters of nonfiction narrative.” — Christian Science Monitor

“The book will be one of the major sources of history for new generations of chess players.” — Boston Globe

“David Edmonds and John Eidinow have penned a delightful book about the politics of that legendary match.” — Washington Times

“Enthralling…. Edmonds and Eidinow are ideal guides through the history and psychology of chess.” — San Francisco Chronicle

“This is the definitive history of Fischer vs. Spassky.” — Washington Post Book World

“Note to Hollywood: It’s Miracle meets A Beautiful Mind. Get on it.” — Entertainment Weekly

“The finest addendum ever to the 1972 chess world championship.’” — Los Angeles Times

“Superbly researched…. Bobby Fischer Goes to War fills an important gab in the literature on this showdown.” — Florida Sun-Sentinel